Note / The character profile of MAYC 1611, Bellamy Bougaimoux (AKA The Rougarou)

It gives me great pleasure to introduce to you, the reading public, my good friend, Mutant Ape 1611, or as I call him, Bellamy Bougaimoux (AKA The Rougarou).

As I mentioned yesterday, each license agreement comes with the necessary opportunity to give the Writers Room some context about your ape. Yesterday, I published my character profile for BAYC 3220. And now, I give to you... 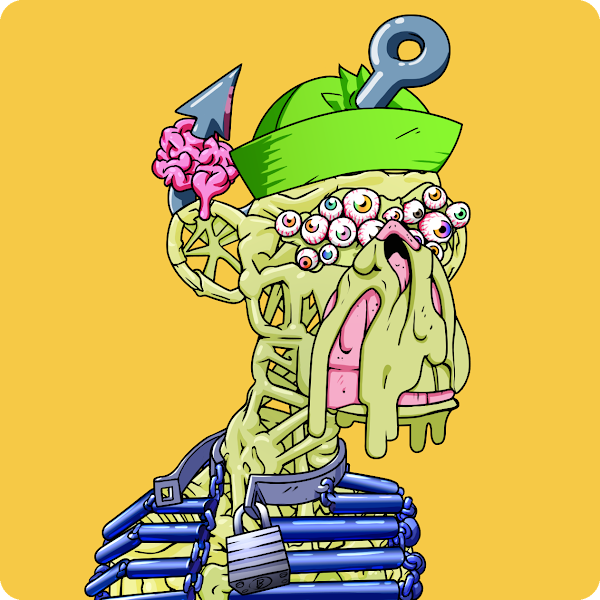 Tell us about how your Ape or Mutant ended up at the Yacht Club and the role it plays in their life.

After his wealthy hometown was symbolically destroyed by mutant DeFi anarchists, Bellamy Bougaimoux — aimless college freshman, poet, and wealthy heir to a French banking fortune — was slipped some serum as he hid out in a jazz bar to wait out the ensuing post-curfew riots. The serum-slinging conspirators took pretty boy Bellamy to a forced-labor ship, where he worked until eventually escaping into the swamps near the Bored Ape Yacht Club. He lives in a mutant enclave of artists, musicians, scientists, and other intellectuals in the deepest recesses of the swamp. He's always the dumbest and youngest in the room, though he tries to assert his intellectual prowess whenever possible. Many disparage him because of the chunk of his brain that's stuck on the end of the anchor that's penetrated his skull. But that's not his brain.

It's here among his politically risible peers that he discovers the only operational radio station he'd ever seen in his life. The Bored Apes have all gone metaverse, leaving such archaic technology to molder and fade. But Bellamy has other ideas. He's going to broadcast his radical philosophies to rally the mutants to mutiny.

Tell us about your Ape or Mutant’s involvement at the Yacht Club. Are they a member, a worker, an aspiring member, etc.

Bellamy haunts the swamps outside of the Yacht Club, and he does what he can to remain completely anon. On his radio station, WMUT, he's known simply as Rougarou, a reference to the Cajun folkloric monster who lives in the swamp. He's using his radio show, "Rougarou on the MAYC" to rally mutants to overthrow the Yacht Club. The rest of the time, he plays novelty records because that's all he has.

Tell us a brief story that defines your character’s involvement at the Yacht Club or their favorite part of life there.

Not long after Bellamy arrived at the Yacht Club — well before the radio station and before he became the Rougarou — he took a job as a dishwasher at the trashiest spot in the vicinity. It was there that he grew radicalized against the nouveau riche of this balmy paradise.

He produced a quickly suppressed pamphlet that saw limited but highly influential distribution. It was called "The Two-to-One Ape-ortunity: An Essay on Questioning Dominance Structures." The title gives all the context one might need, but in short, his thesis was that if there are 20,000 mutant apes and 10,000 socially dominant bored apes, then surely the social balance must tip sooner or later, so why not sooner?

He was fired from his job the next day and came home to find his modest little lean-to ravaged. That's when he moved deeper into the swamp.

If Jenkins were to describe your Ape or Mutant with one word, what would he say?

If you ask about the Rougarou, you'll get one of two answers.

Normies say something like, "I've heard of him, and apes say he's crazy..." or "I listened to some broadcasts at an antique shop, but I don't think anyone's crazy enough to listen to this guy."

Everyone else says, "Who?" not because they don't know. They do. They're sussing out if you're "on the right side of history."

Jenkins might not be political, but he knows how to keep out of danger's path. So if he had to describe the Rougarou in one word, Jenkins would say "Who?"